My thoughts and takeaways from a conversation with Anoop Maini

Anoop Maini was one of dentistry’s good guys. He was honest, humorous and managed to impact the lives of thousands of dental professionals all over the world in a positive way.

You could say he was a world-famous dental influencer in the most profound sense of the meaning, but you would never have known about his fame and influence when meeting him.

That’s because, despite his stature, he always made the conversation about you and him – one-to-one. Conversations were never about his success or achievements, he just wanted to learn about you and help others. If there ever was an example of a person who lived and breathed the values of Dale Carnegie’s How to Win Friends and Influence People, it was Anoop.

Anoop was a friend and client for over a decade. He was the one I could pick up the phone and talk to at any time of the day. He was always ready with advice and honest feedback, and his finger never strayed from dentistry’s pulse. If I wanted to know the latest on someone or something, he knew! Dentistry was his world and his life.

In Anoop’s last months, our conversations often came back to one subject: The meaning of happiness. What’s it all about? For Anoop, the answer was simple. The answer was family.

Anoop loved his family and loved spending time with them. But he also felt he had sacrificed time with them to achieve success and build his business. Finally, Anoop told me, he was beginning to kick back, enjoy the fruits of his labour and appreciate what was truly important.

It wasn’t the only life lesson I took from Anoop. When I scroll back through our many text messages or remember our phone calls, I realise how fundamental he was in shaping my values and outlook on life.

Anoop left us on 22 July 2019 – a date I would usually remember for being my wife’s birthday. On the morning of his passing, he sent a selfie and a quick text message brimming with his usual positivity. He seemed on top form and in high spirits.

His death left a void in my heart – in all of our hearts – and in dentistry as a whole. I think it was only after he had gone that I realised the enormous scope of his influence on the profession and its players.

As I sit here writing, reflecting and trying my best to summarise the impossible, I can hear Anoop chuckling. He was a perfectionist who would insist this piece should be word-perfect – not out of pedantry, but because he always wanted to inspire others to be their best.

I feel immensely fortunate to have captured one of our conversations for the Dental Leaders podcast. It’s filled with Anoop’s characteristic warmth, wisdom and wit.

I wanted to summarise a few of the many take-homes and lessons of the podcast – both spoken and unspoken. In an hour or so packed with insight, this was no easy task.

Anoop had the fortune of growing up with an inspirational role model – his dad. Anoop described his dad as a selfless man who wanted the best for his children and made many personal sacrifices to give them the best start in life. His focus was on giving them the best education. He also described his father as his moral compass and rock.

The parallels with my early years are striking. My father was a single parent who ran a corner shop and drove taxis, often putting in gruelling 16-hour days, seven days a week.

The message that both Anoop and I repeatedly heard while growing up was that our fathers worked hard to give us a better life and good education. In doing so, they set a courageous example.

From Hardship to Entitlement

Anoop didn’t grow up well-off. He knew what it was like to go without and had a keen sense that the best things had to be earned through hard graft. Anoop didn’t want his children to face the same hardships – but neither did he want them to grow up with a sense of entitlement. As a father, he grappled with the same dilemma I do.

There are no hard and fast solutions to problems like these, but this is a quandary Anoop engaged with earnestly. In the podcast, he talks about some of the strategies and approaches he used to solve it.

Anoop always said: “Do a job you love – something you are good at – and the money will come.”

He spoke about the careers of his son and daughter Rohan and Nikita, both of whom have taken different paths. By choosing careers they are passionate about and pursuing excellence on their terms, they are still following his vision.

We all want the best for our children. Anoop’s example shows how pushing too hard could mean our children end up in jobs with no passion or satisfaction. We are there to guide, steer and help our children explore their passions.

Material things provide instant gratification – but scratch the itch, and it’s over. The pursuit of material gains leaves us perpetually in search of the next thing. It turns our life’s purpose into the constant topping up of a void that only a sense of purpose can ever really fill. Anoop found his purpose in dentistry and nurturing others.

Live by Your Values

Anoop was due to deliver a course in Copenhagen the morning he learned that his father passed away. Most of us would have walked away at that point, I know I would have, and I think delegates would have understood.

But Anoop stuck to his values. His decision wasn’t made of any misguided sense of blind duty but from a careful weighing up of his feelings. He felt his father would have told him to fulfil his responsibilities and get on with the course, so that’s exactly what he did.

Patient Journey is Everything

With all this philosophy flying around, it’s easy to forget that on top of being a wise human, Anoop was the consummate dentist. He was, like I am, a firm believer that the patient journey is everything.

Anoop’s advice was to start with a single patient a day. Spending more time with fewer patients lets dentists get every detail just right and use what they learn to differentiate as they scale.

I’ve built a career preaching this message – and that’s another thing to thank Anoop for from a long, long list. 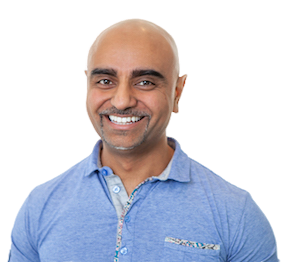 Prav is a healthcare business growth consultant and dental practice owner who loves helping businesses and individuals to develop and grow.